Penguins (order Sphenisciformes, family Spheniscidae) are a group of aquatic, flightless birds. They live almost exclusively in the Southern Hemisphere, with only one species, the Galapagos penguin, found north of the equator. Highly adapted for life in the water, penguins have countershaded dark and white plumage, and their wings have evolved into flippers. Most penguins feed on krill, fish, squid and other forms of sea life caught while swimming underwater. They spend about half of their lives on land and half in the oceans.

Although almost all penguin species are native to the Southern Hemisphere, they are not found only in cold climates, such as Antarctica. In fact, only a few species of penguin live so far south. Several species are found in the temperate zone, and one species, the Galápagos penguin, lives near the equator.

The largest living species is the emperor penguin (Aptenodytes forsteri): on average adults are about 1.1 m (3 ft 7 in) tall and weigh 35 kg (77 lb). The smallest penguin species is the little blue penguin (Eudyptula minor), also known as the fairy penguin, which stands around 40 cm (16 in) tall and weighs 1 kg (2.2 lb). Among extant penguins, larger penguins inhabit colder regions, while smaller penguins are generally found in temperate or even tropical climates (see also Bergmann's rule). Some prehistoric species attained enormous sizes, becoming as tall or as heavy as an adult human. These were not restricted to Antarctic regions; on the contrary, subantarctic regions harboured high diversity, and at least one giant penguin occurred in a region around 2,000 km south of the equator 35 mya, in a climate decidedly warmer than today.

This link is link 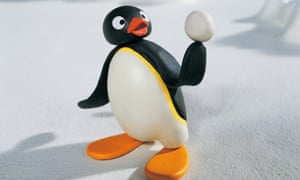 Pingu is a Swiss-British stop-motion clay animated children's comedy television series created by Otmar Gutmann and produced from 1988 to 2000 for Swiss television, and from 2003 to 2006 for British television by The Pygos Group (formerly Trickfilmstudio and Pingu Filmstudio). It centres on a family of anthropomorphic penguins who live at the South Pole, whose the main character is the family's son and title character, Pingu.

The series originally ran for four series (each series made up of multiple seasons) from 7 March 1990 to 9 April 2000 on SF DRS and was then renewed for two more series from 1 August 2003 to 3 March 2006 on BBC Two. Pingu won a BAFTA award.

Pingu was a worldwide hit, due to its lack of real spoken language: nearly all dialogue is in an invented grammelot "penguin language" referred to as 'Penguinese', consisting of babbling, muttering, and his characteristic sporadic loud honking noise, which can be popularly recognized as "Noot noot!" or other variants, although stated to be "Nug! Nug!" by the Official Pingu Trivia page. accompanied by turning his beak into a megaphone like shape. Within the first 4 series, all the characters were performed by Italian voice actor Carlo Bonomi, using a language of noises that he had already developed and used for the earlier Osvaldo Cavandoli's La Linea. In series 5 and 6, the Pingu cast was jointly voiced by David Sant and Marcello Magni.

A Japanese reboot of the series, titled Pingu in the City, began airing on NHK-E on October 7, 2017.